In January 2016 the University of Kent Templeman Library introduced a new document delivery service for staff and students based at its European centres in Brussels and Paris which would allow the supply of physical loans from the British Library. Previously we had an agreement with a local university in Brussels (where our largest European campus outside the UK is located) under which our users could use their library facilities including their interlibrary loans service. After a decision not to renew this agreement we began to search for alternatives.

One outcome of this search was to speed up the introduction of an electronic document delivery option for all our users which nicely coincided with the launch of the British Library DRM-Lite service. From January 2016 on we were able to provide our academics and students based at our European centres with electronic documents supplied by the British Library and (where permitted) other libraries. Copyright law was on our side as students and staff registered at a UK institution but based overseas still qualify for library privilege.

While electronic document delivery for our European campuses proved to be a negotiable challenge (the main stumbling block being the storage of electronic copyright declarations) the provision of physical loans for our users based abroad presented a number of issues:

After numerous drafts, project plans and meetings with our academic liaison librarians, lending services representatives and IT people we agreed to introduce a scaled down document delivery service for our users in Brussels and Paris. As our academic schools who fund the service were mindful of the additional costs, we scrapped the idea of using the BL GIFM/premium service and proposed to supply only items held in the British Library lending division. That would mean to advise users to check lending locations for their requests to ensure it would be available from the British Library for home reading.

To our surprise we found out that the British Library do not charge extra for sending loans abroad. We set up BL On Demand sub-accounts with post addresses of our European centres so that British Library loans could be sent directly to the centre administrators (who would also return them directly to the BL). Requests for Brussels and Paris would still be submitted through our document delivery online request form. Our publishing team created a ‘European view’ website (see screen shot below) to direct users to the relevant request form based on their location. The links specify what items can be requested and provide useful information about local libraries and resources. As our centres at Athens and Rome are insufficiently staffed we decided against a loan option for these locations. Users there are at least able to request documents that can be electronically sourced and supplied. 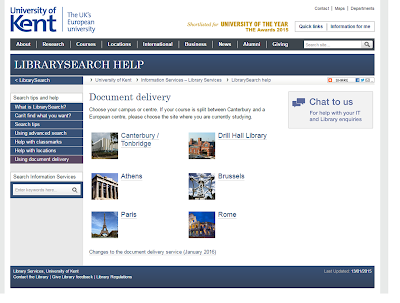 Instead of sending requests for our Brussels and Paris users from our ILL system we use our BL accounts to order them directly. Once the British Library has confirmed availability the respective European centre is informed to expect a delivery. Our centre administrators neither have access to our British Library account nor to our Library Management System and therefore communicate with our document delivery and lending services teams via web forms with drop down options to keep the workflow as simple as possible. We still use our ILL system to process and trace requests and our lending team issues and discharges books on user accounts.

Once a loan from the British Library has arrived at one of our centres it would be held there for a maximum of 5 working days and issued for a 3-week loan period without the option to renew. Web forms are used to confirm that a book has been 1) received by the centre, 2) issued to a user, 3) collected/returned from/to the centre by a user and 4) posted back to the British Library. We encourage our European users to use the document delivery service only as a last resort to keep costs and staff time to a minimum.

It has now been a year since we have launched our European document delivery service. As anticipated document delivery requests for Brussels and Paris are more labour intensive and time consuming and involve additional staff. However, with demand between one and three requests per month the extra strain has been manageable so far. Demand included requests for our Canterbury stock but with only a handful requests we decided it would not be worth to extend our intersite loans service and therefore we will continue to use the British Library instead.


We had a few cases where we had to forward books that had accidentally been sent to our Canterbury campus instead of the respective European centre. We now use the comments field on the BL online request form when requesting items through On Demand to remind British Library staff to send items directly to Paris or Brussels.